Over a billion people live on the 30,000,000 square kilometer continent of Africa, which is surrounded by the Mediterranean Sea, Atlantic Ocean, Indian Ocean and the Red Sea. As the world's third-largest continent, Africa includes 53 States, including for example Ethiopia, Zambia, Mali and Libya. Within Africa, there are 2000 different independent languages ​​that are spoken by many populations. Madagascar is the largest island of the continent and the Nile is the longest river of Africa with 6671 km. 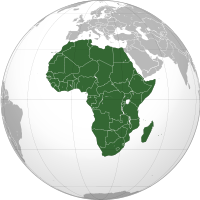 Democratic Republic of the Congo

Republic of the Congo