Located in the southern hemisphere with a surface area of 7.69 million square kilometers, Australia is both the smallest continent and largest island of the world; it is colloquially referred to as "Oceania". Especially well known and extremely popular with tourists, are Australia's cities of Canberra (capital city), as well as Sydney and Melbourne. For example, the famous Opera House, which architecturally resembles a split orange is a landmark of Sydney. Due to Australia's remoteness of being separated from the other continents by oceans, it maintains a wide variety of exotic plants and animals such as for example the marsupials who only live otherwise in North and South America. In addition, the continent has a wide variety of climates such as subtropical or temperate climate. 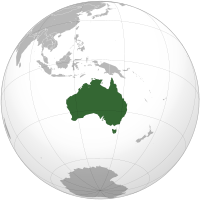