Although Europe, which together with Asia forms the continent of Eurasia, is geographically a subcontinent, it is known as an independent continent from a historical and cultural point of view. The densely populated Europe with a population of 700 million and 10.5 million sq km is currently composed of 46 sovereign States, of which 27 are members of the EU (European Union). These European States including, among others, Germany, Hungary, Sweden and France, make up a large part of the European continent, whereas not all Member States belong to the continent of Europe. The northernmost point of the continent can be found in Norway on the Nordkinn peninsula, the southernmost location at Punta de Tarifa in Spain. 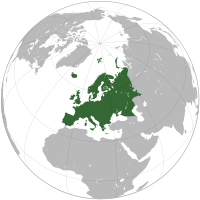