Asia consists of different regions, namely North, Western, Central and Southeast Asia, which are each composed of individual countries. For example, Kazakhstan, Afghanistan and Turkmenistan belong to Central Asia. Countries such as China, Japan, North and South Korea and Taiwan belong to East Asia. In terms of area, Asia is the largest continent on Earth with 44,614,500 square kilometers and a population of more than four billion people. Due to its size, it has especially diverse vegetation adapted for various areas such as permafrost, desert or tropical rain forest. The largest nation of Asia is Russia and China is the most populous country on the continent. The Maldives is the smallest country. 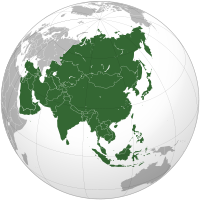